Home » What Homeowners Should Know About Radon Testing 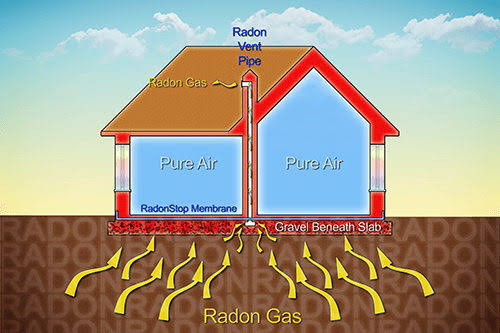 For those who don’t know, radon is a radioactive gas that’s produced naturally when radioactive metals break down underground in water, soil, and rocks.

The breakdown of metals like uranium and thorium creates the gas, which should ideally get released into the air.

However, if your home foundation and walls have crevices, cracks, and openings, radon can get trapped inside the house.

Exposure to radon can cause lung cancer, which has been proved in numerous studies. In this post, we are discussing the need for a home radon test.

Radon is a radioactive noble gas that emerges from the decay of radium in the soil. Radium is also byproduct or progeny nuclide of Uranium (Uranium decay). The gas is colorless, odorless, and invisible, thus it can only be detected through the use of adequate testing equipment and protocols.

Radon is typically found in outdoors and is normally found at very low levels in outdoor air and in surface water, like rivers and lakes. However, it can also be found at higher levels in the air, in houses, in buildings, and in water from underground sources, such as private well water.

There are three categories of radon tests-

See also  Does Smoking Cause Wrinkles?

When should you get a radon test done?

Ideally, homeowners should consider radon testing at least once in two years. If you are buying a new home, you should get the test done as a part of the home inspection. Make sure that you don’t compromise on this aspect.

What if radon levels are higher?

There are numerous ways to fix radon levels inside a building. The most effective and common option is to have a sub-slab-depressurization system, which basically allows radon to pass into the environment instead of getting inside your home through PVC piping and a fan.

Additional steps like sealing the crevices and cracks can help but are not enough without a proper system in place. Also, don’t fall for paints that promise to keep radon out of your home. Data shows that these don’t work.

Radon exposure can exponentially increase the risk of lung cancer, and it is always wise to get your home checked by a professional service in two years at the least. You can always decide on mitigation methods with the experts.