Home » How to Motivate Yourself To Get Help When Depressed 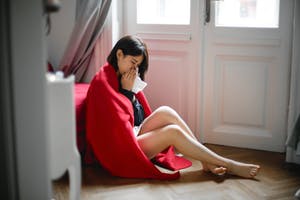 Depression is a depressive disorder that negatively affects how you feel. Sometimes depressive feelings are temporary or environmentally caused, but other times it can be due to a chemical imbalance or seemingly out of nowhere.

Depression symptoms can range from mild to severe. Here are just a few signs of depression:

Some people have an idea that depressed people never make it out of bed and feel suicidal, meaning they can’t be depressed because that’s not their own experience. However, it’s possible to be depressed without even realizing it. To be apathetic towards hobbies you previously enjoyed as well as being anxious can creep up on you, for example. How to know if you are depressed is an important first step.

The evolutionary benefit behind depression

Depression isn’t as much of a meaningless evil as it’s portrayed to be. Not to be remiss in saying that, but depression helped our ancestors in various ways, such as boosting the immune response to infections as well as boosting analytical thinking and sometimes focus.

This isn’t to convince you that you should revel in depression for its benefits, but rather to build more understanding of the condition. There’s no need to be disconnected from it. It’s a part of our history and, as increasingly discovered, a part of our genome.

There’s a lot of depression help online telling you how to get motivated and treat depression – like this article now. Some advice can help, but it can’t promise to solve everything. It also doesn’t tie into the causes of your specific issues of depression, which is necessary to have more effective treatment.

Everybody knows the wonders of therapy by now, and there’s overwhelming evidence to support its effectiveness. What’s difficult, though, is actually going to therapy. Once you’re behind closed doors, you’re in safe hands, but getting there can take a lot of effort, time, and money.

This is why online therapy has blown up recently. Its popularity is through the roof because it’s an easier, cheaper, and more accessible first step in getting therapy (as you will see in the next point, small steps are important). The best therapy sites for depression are easy to find and easy to sign up for, and you can choose the method of communication that you’re most comfortable with.

Therapy may sound heavy, but it’s not the case. There’s never a scenario in which it will be described as being overkill. The interactions from therapy sessions can be an incredibly effective way to feel more motivated about getting better as they provide you with the tools to solve your problems in the real world.

How to overcome a lack of motivation

Unfortunately, in order to treat our depression, we need to be motivated to do so. The issue is, that’s the very thing depression can suppress. Here are a few steps towards getting better and getting motivated again.

Most of us get put off at tasks that are seemingly too big to tackle, and solving your depression certainly can feel like Everest. We can treat this as we would if it were a project at university or work: break it down into smaller goals.

When looking online at how to deal with depression, we’re told running can significantly help. It can be, but running 5k and getting a runner’s high seems a long way off, so we need to scratch that for now. Instead, we could just focus on going for a morning walk to get fresh air and some light exercise. And after building this habit, perhaps we could do some intermittent jogging between our walks.

The same goes for any advice given on depression, like hitting the gym. A typical 60-minute workout will probably leave you quitting halfway through and getting further demoralized. Setting our own goals and not following what others are doing (i.e., experienced gym goers) is tied into intrinsic motivation, not extrinsic.

Don’t worry about how slow the progression is; just revel in any progression at all. Expecting too much of ourselves sets us up for failure, and that’s a quick way to give up on the new habit you’re trying to form.

Nobody deserves to be depressed, so the point here isn’t to resign yourself to a life of depression. But, accepting how you feel in the present can take you a long way. So, instead of resisting and consequently despising the depressive mood, simply accept it for what it is in the present moment. Understand that it’s okay to be sad, and it is, to some degree, our choice over whether we’re going to get sad about being sad.

The opposite is also true. It’s common to wallow in a depressive mood and convince ourselves this is a part of our identity or that we don’t deserve to try and get better. A middle ground of acceptance over your mood in the present moment can help reduce anxiety and prepare yourself for making the next step. Albert Camus would tell you to embrace the absurdity as Sisyphus did.

So, if you try to motivate yourself but it doesn’t work, that’s okay. Tomorrow we go again.

Taking care of yourself

This is why Jordan Peterson’s famous advice about tidying one’s own bedroom went viral. It was so simple but represented so much about the healing process. In only 10 minutes, we can improve our environment, and the tangible results are clear for us to see.

This advice can be extended to personal hygiene, limiting substance abuse, and diet. Upholding ourselves to these standards can help improve our own self-respect, which in turn helps with esteem and motivation. Again, don’t be unrealistic – you don’t need a 30-minute skincare routine in the morning. Don’t begrudge missing a day either, just try and form small habits and build on them.